Each Thursday through to 13th October, Unusual Suspects takes up its summer residency at Sankeys Ibiza for a massive 22 weeks. The club will play host to some of the biggest names in the world of techno.

Born at Sankeys, in the Spektrum room at Tribal Sessions in the summer of 2015 the night was born, and with the main resident of Detroit Love, Carl Craig firmly at the helm it quickly became the island’s most popular party. Sankeys Ibiza saw the likes of Eats Everything, Martin Buttrich, Nicole Moudaber, Stacey Pullen and Audiofly all play at the club. Also pulling out the stops week in, week out was Unusual Suspects’ main resident, the young and super talented Italian, Frank Storm.

With the 2016 season in full swing now, we sat down with Unusual Suspects’ Marco Bassi to get an insight into the rigours of the Ibizan competition.

“I try to focus on my own party. This is the only thing that matters for me in this moment.”

For those who don’t know, describe the inspiration behind the name “Unusual Suspects”?
We were looking for a cool name that evenly represented all the crew and artists in the same way. As soon as I saw the logo I understood it was perfect for us.

What is your approach to curating a lineup? Aside from the obvious “talent” aspect, how to go curating a lineup for an individual event vs. an entire Ibiza season?
The lineups are the most difficult to put together. They have to be balanced and create harmony throughout the night. We are really selective with DJs. You won’t see any mainstream DJs on our lineups. Most of all, we care about quality and productions.

What balance do you maintain between “friends” of Unusual Suspects and bringing in new artists?
Usual Suspects has 3 residents – Frank Storm, Janina, and Federico Grazzini. We work with a lot of artists and we consider everyone equally special.

What is the most difficult thing about a summer on the island, in general?
Don’t event know where to start to be honest! The list is so long. A normal party series may gave 12-13 events – we have 23 this summer. So everyday something is happening. I always say to my team that they have to see the season like a marathon. Save fiscal and mental energy. Be focused in any decision they have to make.

How do you find the nature of competition on the island?
‘Jungle’ I believe is the correct word.

Would you say it is a “ruthless” environment or one where everyone ultimately looks out for each other?
To be honest with you, I don’t really go out a lot. And when I go out I tend not to go into other parties, to see what they do or may not do. I try to focus on my own party. This is the only thing that matters for me in this moment.

How does Sankeys Ibiza, as a space, fit with the concept behind Unusual Suspects?
It’s perfect. David Vincent the owner of Sankeys has supported us from the very beginning. I hope to carry on working with the club for many years.

You have many Romania-affiliated artists throughout the season. How does this sound of the Eastern European country fit with the ethos of Unusual Suspects?
I personally love their sound – I think that it fits perfectly with Unusual Suspects.

Is there any event over the course of the season that you are particularly looking forward to?
They are all so important to me. All are equally special in my eyes.

How do you personally prepare for the rigours that Ibiza and the summer season require?
I personally think that the only way to get ready for a summer series in Ibiza is this – working really hard during the winter, getting every single detail ready, rom the pre- to the after-party. Logistics, communication, graphics. Everything.

Do you have any pre summer ritual for mindfulness?
No 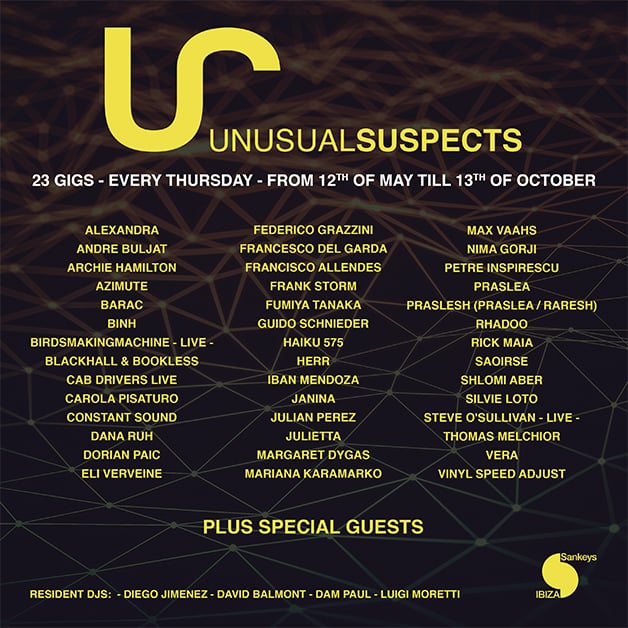