Movement Torino Music Festival is all set to transform the city into a party paradise by elevating several locations into contemporary electronic music venues.

Movement’s mission is always to collaboration with important cultural institutions such as Conservatorio Giuseppe Verdi di Torino, Politecnico, Museo del Risparmio, Museo Ettore Fico and BasicVillage’s Temporary Museum mean that the program of the festival offers meetings and lectures and make it much more of a 360 degree cultural experience.

Further details of the programme can now be revealed, with Kerri Chandler, Davide Squillace and Virgo Four all added, as well as the news that the Red Bull Music Academy presents a Classical meets Contemporary event on October 27th at Conservatorio Giuseppe Verdi starring Elektro Guzzi.

Then there is a workshop on the 29th which discusses the interactions between music and technology, Superego celebrates its birthday on the 30th, and the main show runs from 6pm – 6am with five stages and tens of great acts all lining up on the 31st October before it all closes down on the 1st November with a live show from Virgo Four and a very special guest. 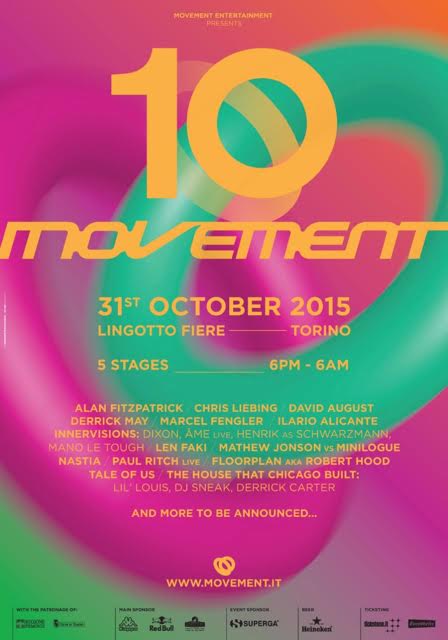