We all know the phones on the dancefloor conversation: should you? shouldn’t you? where? why? all of that…

Well, everyone’s favorite multi-national behemoth Apple seems to know this conversation too and has now been awarded a patent that, theoretically, will be able to block mobile phone camera within certain spaces. Basically, using the iPhones infrared sensor (see diagram below), participating venues would be able to transmit data points, making iPhone cameras shut off when pointed at the stage.

The patent has been circling around Apple since 2011 and, at time of writing, there has been no announcement to implement the technology into the next generation of iOS, but the 2014 re-filing seems to show that Apple is indeed interested in its capabilities.

Aside from the photo blocking capabilities, the technology also is aimed at augmenting realities, as well as creating certain “second screen” and multi media presentations. For example, whilst looking at an artwork in a museum, users could point the camera and information on said artwork would appear on their screens. 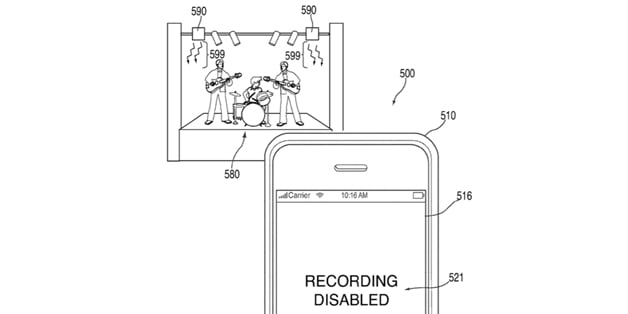