At Apple’s lavish World Wide Development Conference yesterday, the tech giant’s very own music streaming service was announced: Apple Music. The streaming service will be available from June 30th for all Apple users, while Microsoft and Android users will have to wait until fall; a subscription will cost you roughly ten bucks a month.

The service promises a full, 360 music experience where users will not only be able to listen to the vast album catalog, but can also check out music videos, lyrics, and interact with artists in a number of ways via Connect. The flagship feature of Apple Music, however, is the exclusive radio channel that that subscribers will be able to listen (costing $9,99 a month). Just like they have done with the best coders, Apple has now bought up some of the world’s most celebrated radio DJs from other stations, like the influential Zane Lowe who was snatched from his rosy spot at BBC’s Radio 1. The radio channel, named Beats 1, will be broadcasting from New York, L.A. and London.

Perhaps more interesting than the announcement itself were the reactions from the various music execs of rival companies afterwards. Most notably from Spotify CEO, Daniel Ek, who felt like a two-word, slightly arrogant, response would suffice to sum up Apple’s next step (the tweet has since been deleted).

Other music executives have told the Verge that they don’t feel to scared by Apple Music, and predict that it won’t become as successful as iTunes. Another music streaming service, Rdio, had perhaps the best reaction of them all. They actually revamped Apple’s own “Welcome, IBM. Seriously.” ad from the 80’s and with a touch of irony turned it against the company which is now one of the largest and wealthiest multinationals of the world. 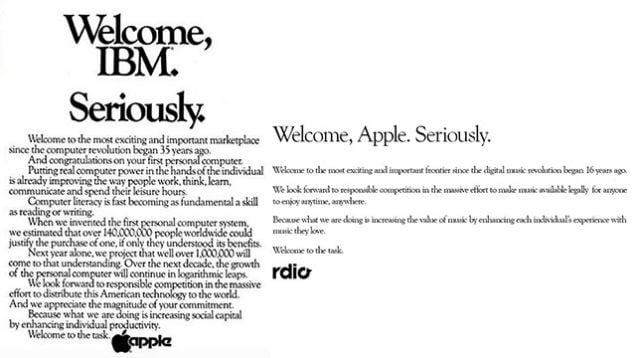 Whether Apple’s competitors can actually sit and relax remains to be seen of course. Their biggest rival, Spotify, now has roughly 15 million paying customers. Apple now has 800 million credit cards on file and new Apple disciples are still joining their already enormous population. The Apple Music app, along with a free trial on offer probably, will already be installed on your new iPhone or MacBook. Spotify is not.

Gizmodo drew a relevant comparison between the idle response yesterday and Steve Ballmer who, back in 2007, made a historical comment about the iPhone, which was then just released. He did not have high hopes for the new smartphone.

“There’s no chance that the iPhone is going to get any significant market share. No chance. It’s a $500 subsidized item. They may make a lot of money. But if you actually take a look at the 1.3 billion phones that get sold, I’d prefer to have our software in 60% or 70% or 80% of them, than I would to have 2% or 3%, which is what Apple might get.”