Following the immense success of Maceo Plex’ appearance at last year’s event, Audio Obscura and Rijksmuseum once again team up for a very special, one of a kind event on Friday, 20 October (7-11pm).

This time, none other than UNDERWORLD will be bringing their legendary live set to one of the country’s most visited and beloved cultural institutions. This is a one-off FREE event, with tickets limited to groups of 2-4 people via registration (The list will close on October 17th at 11.59pm).

Naturally, no introduction is needed for Underworld, an act who are as at home headlining the world’s biggest festivals, as they are in underground techno clubs, warehouses, art galleries, theatres, shoe shops and Japanese department stores. With their appearance at Rijksmuseum’s Bike Passage, it gives fas a rare opportunity see the group up close and personal as the space is transformed into an intimate club venue, furthering Audio Obscura’s mission to bring dance music artists to historic and cultural venues.

Underworld will also be presenting a Keynote talk with Rick Smith and Karl Hyde exploring the importance and power of partnership and co-production in the development and presentation of projects grand, which will be accompanied by visuals curated by one of Underworld’s closest partners, tomato’s Simon Taylor. 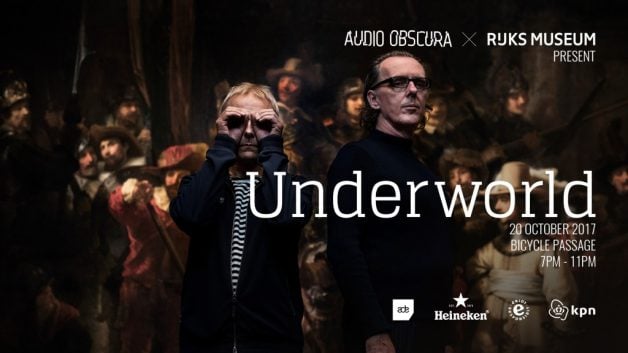