Kenny Dope Gonzalez. An absolute house music legend, four times Grammy nominee, also called a living encyclopedia of beats, collector of over 50,000 records and one of the most prolific music artists of the last decades. Nothing, not even reading his 4 pages biography, reading tons of interviews, could have prepared me for that Sunday afternoon interview with a musician with such a strong influence for the history of house music. Nothing except getting to know what a modest genuine guy from Brooklyn he is, with a bio that’s just dope.

On a rainy Saturday, the climax of ADE, alongside his friends on a glass roof boat, cruising along the canals of Amsterdam, Kenny stood behind the decks and made a seemingly tired crowd bounce as if it was two at night, instead of two in the afternoon. Among all, there I was about to interview a person, who I saw the same week talking among the Godfathers of dance music in panels and headlining several nights of the biggest dance music event of the year.

His career, started before he knew it would be one. Kenny would cut school to go to his mentor Todd Terry‘s house to watch him work on beats and records. His recognition came when he started to play as “Masters at Work“. Now, his career spans over 20 years already and in addition to being one of the most recognised DJs ever, his personal life had a turn, that deserves his nickname. November last year he announced on his Twitter account:

The boat trip was over so we headed to a small Amsterdam’s corner cafe, which accidentally happened to play – a legend of other times – Miles Davis in the background.

Kenny, when you started playing, started touring with the big guys, which was the moment you ever felt a stage fright?

Before the recording part i must have been 14 where i started actually doing some parties at school/ playing at school. I was comfortable because I knew the kids at school ever since that, it went off from there. And then even the neighbourhood parties that we did, it was still everybody that you know from the neighbourhood, it was a lot more fun than being scared or than having any kind of fright. later on when we started going on tour, going abroad, it reminded the setting of being at school. my main thing is just being able to read the crowd and I want to play things that people like and make people have a good time, that’s my main focus.

When you stood at the decks on the boat, it was as if you hypnotised everyone to dance along. When you play, how do you balance the energy from and to the people?

The boat situation is hard. You are dealing with sound issues and you can really only turn it up slow, while people are talking. It’s a different vibe, specially when you have to turn it down, when stopped (the boat was actually stopped by the water police on the IJ, but due to other issues regardless of the sound). But we are all friends and the main thing was to support each other.

But it depends. I am very tired right now. I was in Dubai last week, the next day in Manchester, then I went home, cause it was my babies’ birthday Sunday, so we had a birthday party and then Tuesday I’m already on the plane. And then all week here, I’ve been on panels and gigs. So this morning it was the first time, that I actually said, it hit me.

And that is the thing about performing, regardless whatever you are feeling, wether it is personal, wether you are tired, you are sick, you still have to perform. You have a job to do and your performance has to be the best that it can. To me that is the hardest thing, much harder than stage fright.

“And that is the thing about performing, regardless whatever you are feeling, whether it is personal, whether you are tired, you are sick, you still have to perform. You have a job to do and your performance has to be the best that it can.”

During the “Meet the Godfathers” panel, along Dave Clarke, Manuel Göttsching (Ash Ra Temple), Boris Blank (Yello), Paul Hartnoll (Orbital), you were the only one to raise your hand when Dave Clarke asked who is still recording on vinyl. Where does your love for vinyl come from?

Today a lot of the kids are just used to listen to stuff loud. It’s just loud, but listening to stuff loud that doesn’t mean it is good. That being said, when you are listening to a piece of analog music it is a whole different experience, it’s warmer. You are listening to sides of music that you won’t find in digital. But it is what it is. I like both sides of it, but when I make records I tend to go the other direction (referring to vinyl).

Then where do you find the main difference between vinyl and digital?

Well, you know, it’s something to touch. When you have a record, you can read it, collect it, you can look at it, you learn from it. When you have a digital piece of music, nothing comes with it. It is just an MP3, with just a wave file, with a credit on it and that’s it. You don’t have something tangible in your hand that you can feel and touch and read, why this artist made this music, or why this producer made this record, the story behind it. The artwork. People in the 60s or 70s collected records because of the art. Then they listened to the music and “oh this is pretty cool”. I found a lot of records just because of the art. It’s a whole different animal.

But today the youth and the kids are brought up in the digital age, and swiping, and youtube, you know? This is their way of finding things and they do. Unfortunately there are not as many record stores around the world, like there used to be. Where you are able to actually go into these stores and learn about music, and meet friends, fellow people, collectors through that.

Would you say a vinyl record is more finished as an art form?

Absolutely! Vinyl has much more dimensions and creates a whole image of what the artist is about. 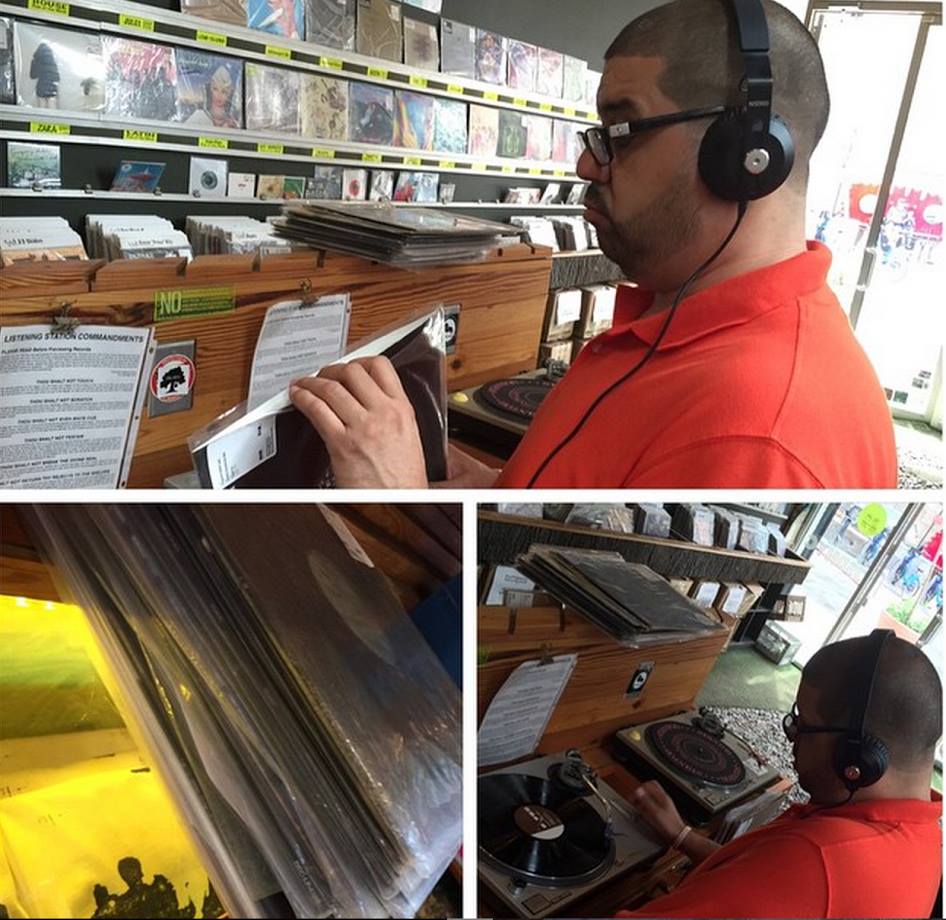 In the opening debate that kicked off ADE, they talked about the fact that there are 25k tracks released per week. How do you manage to select and choose the right music?

I try to shop every two weeks. Especially when I go on tour, that is when I go. I give myself just a couple of hours, 2-3 hours, to go through the stuff, whatever I like I buy, If I don’t find anything I leave it in the cart and come back in 2 weeks and check.

Besides that its just too much. We got to realise everyone has access to make recordings now, but it doesn’t necessarily mean that they are good. There is no filter. Everything is just out. And that being said, if a young kid is making a record it is hard for the kid to break through. It is a paradox, that with technology the access to people is wider, but at the same time it got harder to get through to them. Because the internet is huge.

It seemed your philosophy is that limitation extends creativity, is that correct?