When we are talking HYTE, we are talking real, raw techno and house sounds in stripped down bare industrial surroundings, sophisticated in its simplicity. It thus makes it no surprise, the prominent party institution HYTE announces nest it’s NYD celebration in world’s techno mecca, Berlin.

Meanwhile sound wise, it is a collection of heavyweights. To begin with a local, after several seminal sets this year, the industry has been whispering about, the lineup is joined by one of Germany’s biggest techno exports and fellow Berliner Monika Kruse. Following, the two HYTE residents, both distinct in their own sound, CLR boss Chris Liebing and Loco Dice, both of who join after a relentless season in Ibiza. For the NYE the Desolat head Loco Dice invited one of his favourites, the notorious Seth Troxler to play a back-to-back set.

Meanwhile, the techno icon Dubfire persist on artistic challenging and for the special occasion will bring his Live HYBRID show to Berlin for the first time. Consisting of elements of 2D and 3D animation with live audio and lighting it is a concept based on reinventing the concert experience.

Not to mention, the techno titan Richie Hawtin, who took a break from Ibiza this year and focused to question the status quo with his landmark mixer PLAYDifferently will be doing a special performance in his adopted European hometown Berlin.

A real contrast, will be Berlin’s very own Fritz Kalkbrenner, creating a feelgood atmosphere with his own brand of vocal melodies and warm beats create. 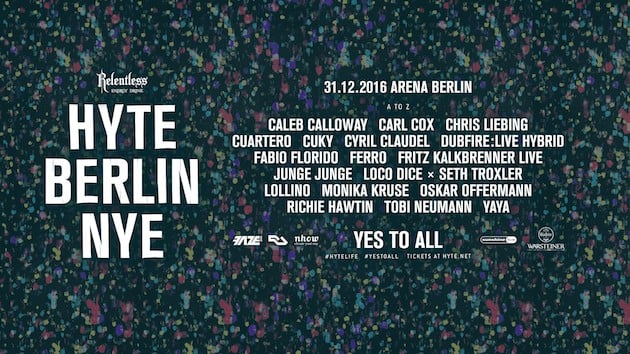