Behrouz has been part of the dance music scene for almost thirty years. Despite this, though, he is still right at the sharp end and celebrated for his forward looking house sets which have become known as the desert sound.

Based on dreamy melodies and meditative grooves, it is inspired by his love of playing Robot Heart at Burning Man and takes him round the world. He also runs his own party Do Not Sit on the Furniture, which is similarly cosy and thoughtful and has brought some credibility to an often too commercial scene in Miami. It also lends its name to a label which puts out deep house to get lost in, and this summer he takes it to Ibiza for its first ever season with the likes of Cassy and Sasha joining him — tickets and info to the opening party on June 7th can be found here. Here, we speak to Behrouz for more insight.

You have been in dance music 30 years now, what keeps you enthused, motivated and most excited?
If I can sum it up in one word, it’s simply music. Listening, playing and creating music keeps me going passionately for last 30 years. Also, It’s all about having the passion to keep on playing and loving what you are doing. You are only as good as your last performance so you have to give it your everything no matter if it’s 1000 people on the dancefloor or 10 people.

Your sound is unique, often called desert house – what does that mean? What is your style to you?
It’s beautiful music, with harmony and a nice groove. Almost like Balearic music but with an international sound. It’s simply sexy music!

What was Do Not Sit On The Furniture born out of, why did you start the party back in Miami?
When I moved to Miami over 10 years ago, I went to do a soundcheck at a club that had booked in Miami. I noticed that there was shift in the music here. Everything had become commercial and there were sofa’s in the middle of the dancefloor. So I asked the promoter are we moving this furniture and he replied, no, we make money from bottle sales and need the furniture on the dancefloor and then I asked where do people dance. So from that point on I decided to open my own club where it was all about dancing and not being worried about bottle sales and about the experience you get on the dance floor! I decided to call the club Do Not Sit On The Furniture and the rest is history.

How has it grown and established itself? Has it changed much since the first one?
The brand and nightclub was created in Miami over 5 years ago. The concept and idea really started over 15 years ago after going to Burning Man for the first time. I moved from San Francisco to Miami and realized that there needed to be a change in the music scene in Miami and I opened up Do Not Sit On The Furniture and from there it grew organically to where it is now. It’s still the same love and passion that goes into each event and all about bringing good vibes all around the world.

How long did it take you to find the right club to set up at in Ibiza? What made Heart right?
Heart was right on so many levels. The intimate feel of the club, the staff, the sound system and how much love goes back into the club.

Have you done all the booking yourself for it? Are they just people you admire musically?
Pretty much yes. I’m very involved in the bookings at the club and the residency. I’ve invited many of my friends and DJ’s that play for the club in Miami and others I have worked with and admired over the years. It’s a very special group of artists we have with us this summer.

Who should come to Do Not Sit? What sort of person and party lover, or is anyone welcome?
Do Not Sit is made for everyone. You can be dancing to an 18 year old or a 70 year old, who are all there to listen to good music without any prejudice and come with an open soul. We bring such a different variety of music and it’s about the magic each one of us feels on the dancefloor!

What influence has Burning Man and Robot heart had on your and your sound?
It helped me develop who I am now and allowed me to play what I really want to play for crowds that are super open minded. This is how I developed my sound.

What are you most looking forward to about the season?
Bringing our vision to Ibiza and telling the Do Not Sit story with our music and our friends.

Tell us about the two events co-produced with others – who are they and why have you got them involved?
We’ll be inviting our good friends Babel from NYC for one event and another event with Gazgolder from Moscow. Both are amazing promoters and friends that I’ve worked with in the past and look forward to sharing the vibes with. 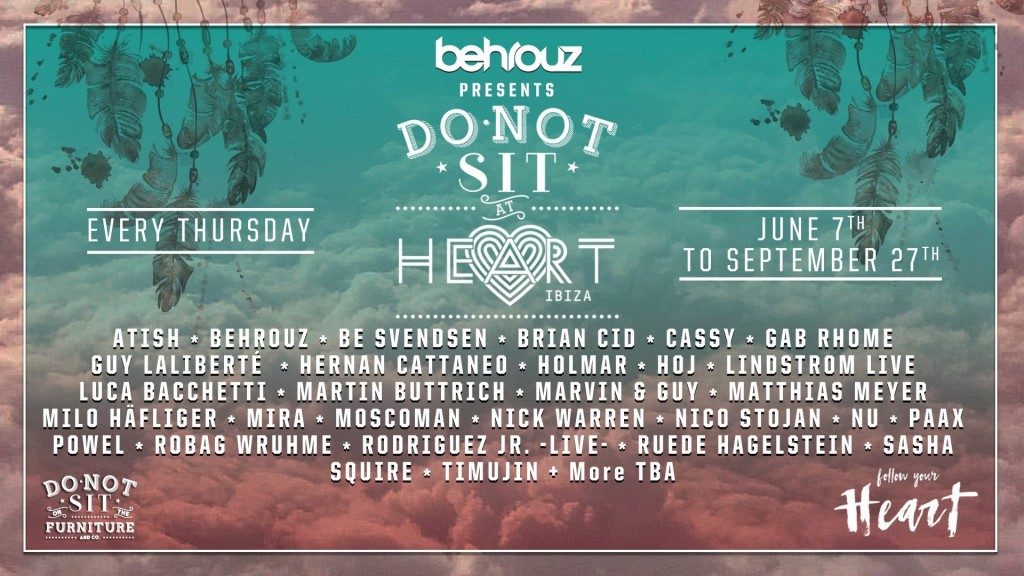