Since his January 2016 relocation to Los Angeles, Sacha Robotti has released a slew of material on the likes of Snatch Records, This Ain’t Bristol, Dirtybird Records, Insomniac Records, Lost Records, and a #1 Beatport single on Suara Music.

Although Sacha’s sound has evolved from his early Berlin roots, one can always recognize his signature: music that lives somewhere between the dirty bass-heavy “booty” plains of electronic dance music and its’ futuristic shores. It is a sound that can be experienced at the likes of CRSSD Festival, Coachella Valley Music & Arts Festival, Lightning In A Bottle Festival, Electric Daisy Carnival Las Vegas, Burning Man, Dirtybird Campout 2016, and around the world.

Sacha will be joining the friends of DHA, Minimal Effort, out in Los Angeles tomorrow for the always proper New Year’s Eve soiree. He will be joining a stellar lineup of Recondite, Audion, Simian Mobile Disco, Francesca Lombardo, &ME, and many many more.. Here, we got Sacha to put together a bit off an “end of the year” playlist, but let’s let him describe in his own words:

“Hey guys I made this playlist of some tracks that I loved playing in 2016! Jeff Mills, Vonstroke, Justin Martin, Bjarki, Kill Frenzy, Walker & Royce, German Brigante, Sidney Charles are some of these artists who I’ve been supporting on the dancefloor. The music here is most Techno or House with Tech influences, I’ve played a lot of clubs and festivals in 2016 where they worked like magic. This has been a crazy year and I can’t wait 2017 taking off. See you at Minimal Effort, Los Angeles on New Years Eve!” 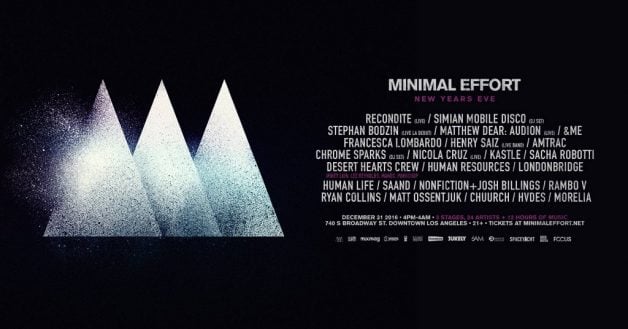