There doesn’t seem to be an end to the amount of drug-excess stories coming in from Australia. The Imperial Hotel in Erskineville, Australia, was forced to temporarily close by the police this weekend after it was found that staff of the nightclub, situated in the hotel, were taking XTC on the job.

On Friday, The Office of Liquor, Gaming, and Racing carried out a targeted operation last weekend after the Imperial Hotel’s nightclub, ‘The Spice Cellar’, had been reported to local authorities for various drug confiscations and intoxication issues, by both the guests as well as the people on duty. New management was brought into the venue two months ago, which resulted in an increase of these incidents. The police raided the hotel on Saturday night and charged two staff members with taking XTC while serving drinks to guests.

Police have also charged management for drug offenses by patrons of the club, excessive noise, public disturbance and “failure to maintain responsible [alcohol] serving practices’ as reasons for the forced closure.”

“Despite repeated regulatory engagements, the venue has failed to implement appropriate controls to deal with illicit drug use and intoxication at the venue. A situation where bar staff and patrons are openly consuming drugs at the venue, and where there have been repeated drug and intoxication issues, is completely unacceptable and shows that the venue has been operating with a complete disregard for its obligations and responsibilities” 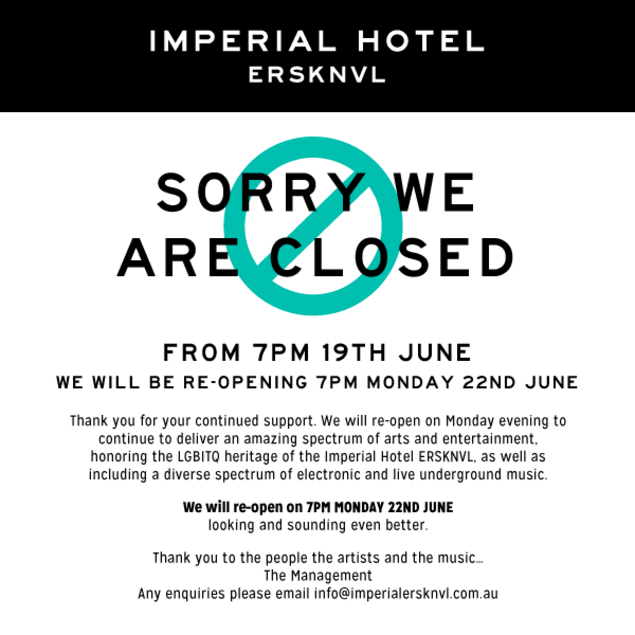 Recent public notice by the venue