The Amsterdam staple that is STRAF_WERK have just unveiled the lineup for this summer’s festival event with its biggest yet lineup.

Taking place on 19 August STRAF_WERK Festival makes its re-entry at the robust and free spirited Blijburg Aan Zee bringing with them some of dance music’s most prominent names and brands in the process. International talent and local favorites play against a backdrop of sun and sea across 6 stages representing the spectrum that dance music has to offer.

Occupying those stages will be one of the most influential artists of the century – Âme. Jining the Innervisions superstar will be the multi talented Maya Jane Coles, who will perform her exclusive summer show. Also on hand, STRAF_WERK staple Hot Since 82 will join, as well as bring his Knee Deep in Sound imprint to a Dutch festival for the very first time. Elsewhere at the festival, STRAF_WERK also welcomes Adriatique, DJ Tennis b2b Jennifer Cardini and Weval. Also on hand for the event, will be a very special b2b from Tom Trago & Benny Rodrigues, as well as the icon nnown as Todd Terje, live performances from Matador and Deltawerk, as well as DJ sets from Art Department, George Fitzgerald, Route 94, Danny Daze, and many more.

Additional names for those on the Casa Bacardi x Mrs. Mokum stage are still to be announced, but hurry up with those tickets because STRAF_WERK Festival is always a summer favorite. 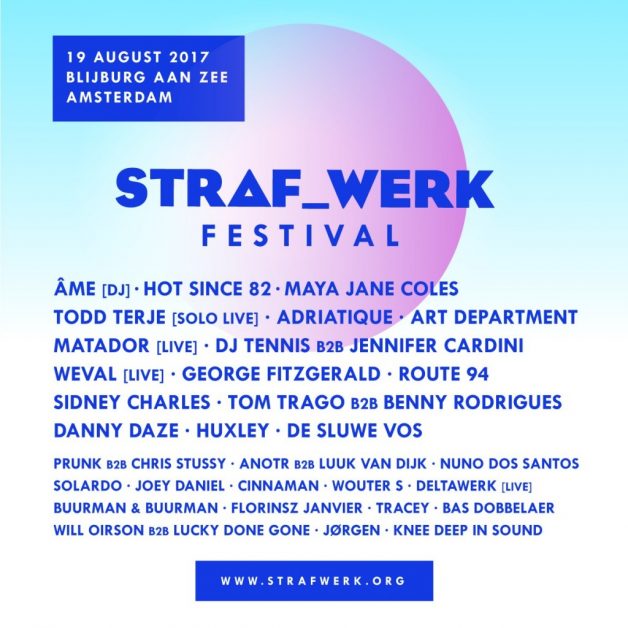