Kingsnight will feature one of the world’s most enthusiastically open event, Glitterbox, as the famed London brand descends on Amsterdam’s Panama with three of its most prized selectors in tow.

Already a night of celebration throughout The Netherlands,’ 26 April will see Glitterbox’s 21st Century take on Disco with Joey Negro, Simon Dunmore, and Melvo Baptiste sending you through the night. Over the last half year or so, Glitterbox has become a veritable phenomenon having grown exponentially, touring the world, and becoming one of London’s most attended events. A full on party brand, its weekly Glitterbox Radio Show continuously occupies iTunes #1 spot (not to mention the iTunes #1 charting compilations selected and mixed by Simon Dunmore) for music podcasts and Glitterbox Recordings continues to release from the likes of Debbie Jacobs, Folamour, Aeroplane, Ralphi Rosario, Mousse T. and The Shapeshifters.

Now, before it kicks off its Ibiza Season on 1 June at Hï Ibiza, Glitterbox is back in Amsterdam and the Dance Music institution that is Panama. With it being Kingsnight, Panama, and Glitterbox, this one is going to be one hot ticket, so make sure you grab yours below 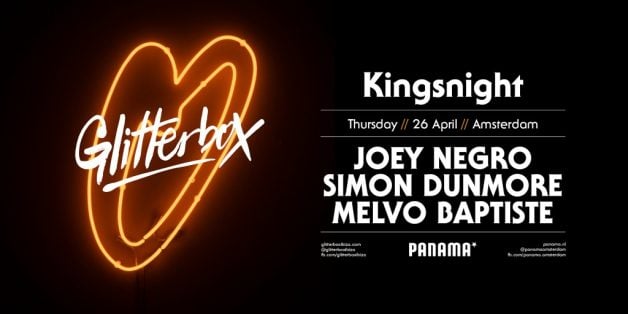