Music On continues its epic journey that started five years ago on June 3 with Marco Carola and family beginning their 2016 season of Friday-night delirium at Amnesia Ibiza.

The Music On concept began in 2012 and now has led to Marco Carola to leave his mark around the world in city’s like Miami, New York, London, which included a residence of 17 Saturdays at Miami’s Story Club and three dates at London’s Electric Brixton, all in preparation for a fully energized Ibiza season.

Music On is Carola’s creative axis and this 2016 season has been designed as a weekly installation of techno and house music. To add extra flavour to every single night, Marco will be accompanied by a diverse roster of artists including Apollonia, Joey Daniel, Leon, Miss Kittin, Neverdogs, Paco Osuna, Sam Paganini and Stacey Pullen, as well as special guests such as Dubfire, Green Velvet, Matthias Tanzmann, Paul Ritch and The Martinez Brothers, and young talents like Egbert and Hector Couto.

Check out the complete lineup for Music On and find tickets to any of the events below. 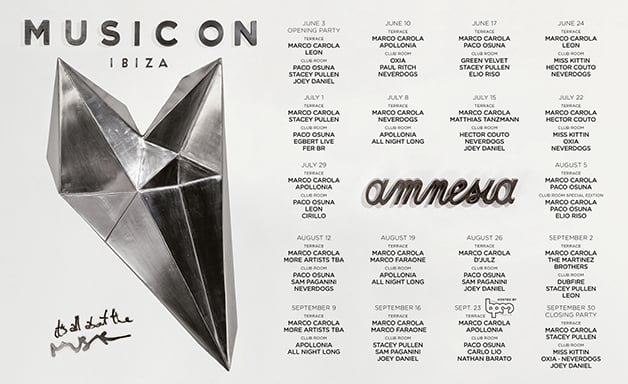