Solid Grooves established itself as one of the leading places to go for fans of proper house and tech last year. As such it makes perfect sense that they are back once again in 2017 with bigger and better plans and a new home. That home is Benimussa Park, the famous outdoor space in the rolling green hills of Ibiza.

It boasts old seal pits and an amphitheatre like main stage where ravers stand and sit on a steeply inclined hill and gaze down on the action. And there has plenty of that, as there has been at clubs like Sankeys and Vista Club before now. What marks this party out is a dedication to fresh acts and no messing gravures that make you want to dance, and sweat, and plenty of them were served up here tonight.

With the sun blazing down it was co-founder PAWSA who was up first and he served up some warming grooves that were slick, well sequenced and seamlessly mixed. The slowly amped up thre pressure as went along and set it up nicely for Huxley.

Huxley is a big name and big time performer and his set was filled with hefty bottom end bounce, nice bass and plenty of fusions of hose, garage and tech. He dropped some of his own remixes and made the crowd really go wild.

Elsewhere, Spaniard Hector Couto served up a loopy and infectious set filled with Chicago tinged grooves and old school techno that was physical, in your face and just what was needed to carry ever more inebriated and tired dancers throughout the night.

Closing things down in the treehouse was Dennis Cruz, a leading producer who has turned out more hits than anyone else recently. His smooth sounds carrie don until the music had to be turned off and had plenty of people asking for IDs and Shazaming all the biggest cuts. On this evidence Solid Grooves looks set to be one of the best parties in Ibiza once again this year. 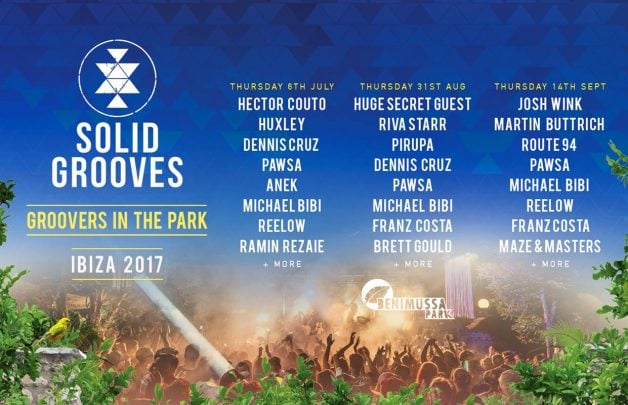