Tony Pike, the playboy who built himself a playground reveals all in a new hard-hitting memoir as the iconic hotelier reflects on a fast life of hedonism and the globe-trotting backstory that influenced his set-up of pioneering Balearic boho bolthole, Pikes.

Now, at the age of 83-years-young the man Boy George dubbed “the real Hugh Hefner” has decided to tell all in a new book. Featuring the globetrotting story of how Tony Pike reached Ibiza, it highlights a man who built himself up from nothing, travelled the world, and became the embodiment of the phrase ‘work hard, play hard’.

“I did want to develop Pikes into a hedonistic haven so others could have some fun. I’d already had loads of amazing experiences before I arrived on the island, and I did also want to try in some way to make up for my own misdemeanours along the way” – Tony Pike

In the book, Tony reflects on the highs and lows of his life, goes exclusively behind the scenes of the Club Tropicana video shoot, and discusses his relationships with guests/friends including George Michael, Freddie Mercury, Julio Iglesias and lover Grace Jones.

‘Mr Pikes: The Story Behind The Ibiza Legend – Tony Pike with Matt Trollope’ is published by MT Ink, and is available from all Amazon sites, in both paperback and Kindle eBook. SALES | PAPERBACK | KINDLE 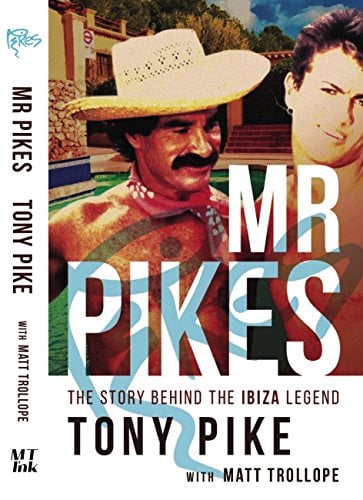