One of the most highly anticipated events of the year is just inches away. On Saturday, DGTL will open the Amsterdam festival season, this time even bigger than before. And we’re not just talking bigger regarding the insane line-up, because there will be much more to be gazed at this time around, with design, art, performance and a ‘DGTL Revolution’ that will play a key role in the experience this weekend.

Unlike last time, DGTL won’t have tents that act as the stages this year, except for the locker tent that is. All 6 stages for the two-day festival (Kompakt, Innvervisions, Digital, Crew Love, Red Bull, Analog, Audio & Phono) are built with an eye on the future, creating some pretty original settings for the visitors. Even the bars are built by the organization itself. Much attention and effort will be focused on the visual and light-show experience at the stages, giving the music another dimension.

Also part of the show will be numerous art performances that will impress, engage or thrill you while making your excursion from one stage to the next or in between sets, like the “Lords of Lightning”, “LRRY the Dog”, “Joanna Peacock” or “The Braincar“. Expect the unexpected.. 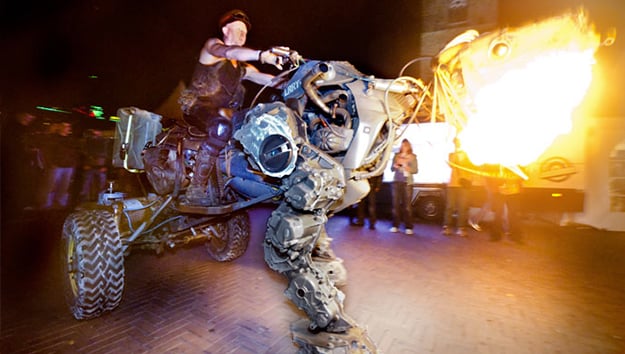 Last but not least: DGTL will start a true Revolution during its festival. The ideology of DGTL Revolution is to make some fundamental changes in the way festivals are set up, mainly targeting sustainability. Because every revolution starts with one key transformation, the element DGTL aims to improve this year will be plastic trash. All plastic cups will be collected by the people of DGTL Trash Collective during the festival and will be transported to the Revolution Factory. Here’s where all the plastic materials will be separated and transformed into a new product that will be presented at the end of the festival.

Only a couple more days and the doors to one of the maddest line-ups in Amsterdam will be opened for the eager crowd (around 25.000 visitors over the entire weekend), together with all the other goodness that the organization has in store for us. If you haven’t gotten hold of a ticket yet then don’t worry, there are still some daytickets available. The weekender and camping-tickets, however, are sold-out.

For those who have the energy left, there’s the official DGTL after at the ‘Scheepsbouwloods’, which is conveniently located at the same NDSM terrain. Here you can continue dancing until the early hours, with a surprise line-up…